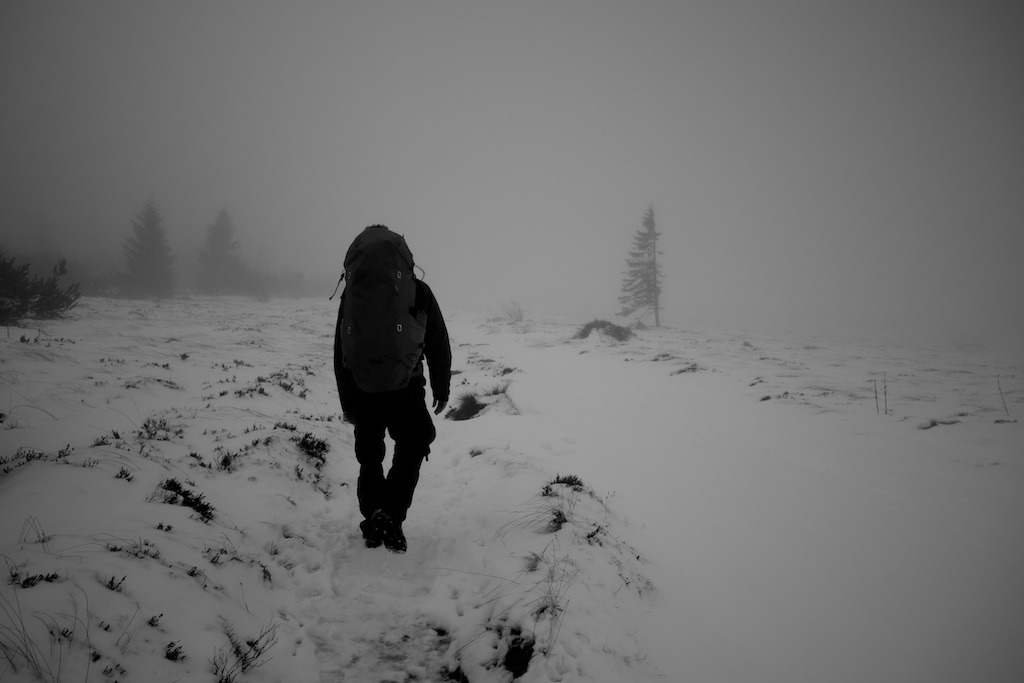 GR 5 Vosges – “You must not whine, that doesn’t help!”, I say it sometimes to my sweet but sometimes determined daughters. Yet it was just that ‘whining’ that I had to do to my busy brother to get him on a multi-day trip. Previously, we were already successfully on the Lee trail in Luxembourg with our sister, now a proud mum and with other obligations.

And yes, in mid-November, full autumn, we went to the low mountain range for a trip on the GR 5 Vosges. On Thursday, November 16, we got into our car at seven o’clock on our way to the mountains between the Lorraine plateau and the Alsace plain.

At the church in the health resort of Le Bonhomme we started at one o’clock for a four-day trip on the GR 5 Vosges. The air is cold and tickles our nose. We pick up the red markings of the ‘Sentier des Crêtes des Vosges’ and immediately there’s a lot of climbing to do. A paved panoramic path with a view of ‘Le Château’ rock formation leads us to the ‘Gîte de l’Etang du Devin’. We pass a desolate German military cemetery and eat in an old bunker from WWI which then served as a water circulation pump.

Afterwards, it goes up to the top of the ‘Tête des Faux’. Along the way there are still many traces of the fierce battle at the beginning of World War I. Ten thousand French and seven thousand Germans were killed here. Everywhere there are iron crosses with barbed wire. We’re only just at the beginning of our trip but have already more than 500 altitude meters in the somewhat stiff legs. A bit of resting on a large white cross and memorial on top of the peak is welcome.

We descend quietly and arrive at the ‘Nécropole nationale Duchesne’, a cemetery for fallen French soldiers. Over a wide path it goes on to the ‘Lac Blanc’ surrounded by ash-gray granite rocks.

The reflecting lake is the largest on the eastern flank of the Vosges and acts as a bottom reservoir for the pump-accumulation plant at the upper ‘Lac Noir’. A moment we lose track of the GR 5 Vosges and there is a lot of climbing to do to get back on the higher path.

On the GR 5 we walk along the quiet mountain lake towards the ‘Gazon du Faing’, a special landscape with soft soil similar to our High Fens. We set up our tarp just before the protected nature reserve. We eat, make a fire, enjoy the sunset and afterwards the thousands of stars above our heads. When the temperature drops even deeper below zero, we crawl into our warm sleeping bags.

We’re early up and marching on the ‘Gazon du Faing’, we should see the ‘Lac Vert’ in the depth but only see snow and fog in the gorge. When we leave the protected area we arrive at the ‘Crête de Vosges’ which we follow for a while. After a few kilometres we get off the GR 5 Vosges over the ridge and descend to the lower ‘Belvédère de Hirschsteine’.

The footpath is now more challenging. On an impressive cold metal staircase we descend between the jagged rocks. A few moments later, the fog rises and we are rewarded with a beautiful view of the valley of Munster in autumn colours.

We continue our journey in the direction of ‘Spitzenfelden’. The beautiful panoramas alternate. This part of the route requires a certain level of hiking skills and no fear of heights from the walker. Those who prefer can simply follow the route over the ridge.

After a short climb we finally arrive at the ‘Col de la Schlucht’. The pass owes its name to the German word ‘Schlucht’, which means mountain gorge. The atmosphere is dead and deserted, faded glory of hotels that might have had a good time in bygone times.

We cross the road and drop to the popular ‘Sentier des Roches’. An adventurous but well maintained and secured route. Perfect to get acquainted with the ferocity of the beautiful Vosges. The classic walk with steep cliffs, narrow paths and deep abysses is for the more experienced hiker with again no fear of heights. On the most dangerous stretches it will be made easier with bridges, railings, steel cables, stairs and there is even a possibility to take shelter.

The first kilometers are the roughest, we are almost stoned by a young gems that causes a small avalanche. At a picnic table on a viewpoint we rest for a while and eat tomato soup and couscous. When we leave the blue marked ‘Sentier des Roches’ and come on a wider path we suddenly hear a lot of noise, falling stones and rustling in the bushes. Two turbulent chamois are racing from the mountain slope in our direction. Before we know it the animals pass by right next to us. For a moment we are bewildered and then we start to laugh. A moment later we can still capture one of the chamois on camera on the gravel path that we follow.

My brother, who clearly has never heard of ‘ultra light’, gets a bottle of bison grass vodka and bacon to roast out of his backpack. ‘Party’!

We walk through the ‘Frankenthal’ and make a short detour to the mysterious ‘Grotte Dagobert’. According to tradition, this humid cavern would have served as a refuge to King Dagobert. Two of his vassals would kill the monarch to enable his brother Childeric to win the throne. Eventually, everything went well with the King and the vassals were sentenced to death and bound to feet and fists in the ‘Lac Noir’.

We climb steeply with the ‘Le Petit Hohneck’ in our back and arrive at the majestic Hohneck. The Hohneck is with 1364 meters altitude after the Grand Ballon and the Storkenkopf the third highest mountain in the Vosges. It is cold and foggy. Passing the ‘Col du Wormspel’ we descend to the ‘Lac de Schiessrothried’. It is an originally glacial lake on the Alsace side of the Vosges fed by a small river, the ‘Wormsabachrunz’.

After a short descent along a mountain stream we arrive at the lovely ‘Lac de Fischboedle’, one of the smallest lakes in the Vosges. There is a nice gazebo next to the lake so setting up the tarp is not necessary. We make a fire and with the clatter of a spectacular waterfall high above the lake we enjoy the evening. My brother, who clearly has never heard of ‘ultra light’, gets a bottle of bison grass vodka and bacon to roast out of his backpack. ‘Party’!

We now follow the path through green, damp forests and over smooth boulders from former stone avalanches, down towards the village of Mittlach. We are now at the lowest point of our trip at 450 meters and from here it is up again. Via a zigzagging path we ascend to an intermediate plateau with a beautiful view over the valley. Along the way we saw some chamois and a few deer. On a wide path between the conifers it goes further up to the ‘Col du Herrenberg’. Once on top of the ‘crête’ it is cold and misty. Through the deep powder snow it goes to the ‘Col Hahnenbrunnen’ where we eat at the closed refuge. It is chilly and the cold wind blows in our faces.

After dinner we immediately continue our route to get it a little warmer. By meadows and deserted ski slopes we finally arrive in Markstein. We warm ourselves up, eat pancakes with cheese and ham and enjoy a large bottle of Breton apple cider. When we warmed up again, we go back on the road with full courage and an even fuller stomach. We start to climb the ‘Grand Ballon’ and as it’s gets darker we gather wood and put our tarp on a small plateau. Suddenly an old man calls us on the higher path.

In ‘Allo Allo’ English he shouts to us that there is a hunting lodge a few kilometres away where we can spend the night. With the predicted wind and snow we accept his proposal eagerly and walk a little further. We fraternize with a couple that comes in later and probably has more romantic plans than us. They share their French wine, cheese and chocolate cakes with us by candlelight before they walk back to their car in the dark. We rest by the fire and crawl in our sleeping bag a bit later. Outside, the wind hits the door and there is fine powder snow blowing under it.

In the morning we smell like smoked salmon. We eat and pack everything. When we come outside, everything is beautiful white and covered in snow. Steadily we climb further via the ‘Col de Haag’ towards the top of the ‘Grand Ballon’. The snow is deep so we leave the GR 5 Vosges for a while and continue on the closed snow-covered asphalt road.

Eventually we arrive at ‘Le Grand Ballon’ with a height of 1424 meters the roof of the Vosges. From the top there is a beautiful view of the area, we have heard, we only see fog and snow. Far further to the south you can see the Alps in favourable conditions, including the Mont Blanc. The route of the GR5 hiking trail (Hoek van Holland – Nice) also leads to the Grand Ballon. The French-Spanish hiking route GR7 begins.

Normally we were picked up here but the way up is frosty and snowy. We decide to call and to meet in the valley. We descend along the mountain road, make a sport of cutting of the curves and after ten kilometres we arrive in the village of Goldbach-Altenbach. Our drivers, who during our walking trip enjoyed themselves a few days in the Alsace, pick us up and even provided a delicious picnic with local delicacies, cheese and sparkling wine. The return journey is a culinary delight and after a little less than six hours we arrive back home. A more successful autumn tour with sometimes wintry conditions on the GR 5 Vosges.

note: English is not my native language, for grammatical improvements send me a message 😉

While we were going to toil in the middle mountains, my father ans his wife went for a treat in Alsace. This had the advantage that we could ride together and they could drop us off at point A and after four days come to get on point B. We could do a draw in line.

By car we drove to Le Bonhomme and were picked up four days later at the foot of the Grand Ballon.

You can travel by train to Colmar and than further by bus. The site  vialsace gives more info and timetables

The signage in the Vosges is good, every hiking trail has its own symbol. We walked large stretches of the GR 5 but got off the route regularly to make some extra altitude meters or because the route seemed more beautiful and adventurous. The routes are clearly indicated on the topo card with the corresponding symbols.

In the Vosges there are numerous staffed (most of them only open in spring/summer) and unstaffed huts. We stayed overnight in the wild under the tarp, at the lake of Fischboedle under a wooden gazebo and in an abri on the flank of the Grand Ballon. If you camp in the wild you keep to the rules of ‘Leave No Trace’ and respect the areas where it is forbidden to stay overnight (Hohneck and surroundings).

It was pleasant weather during our trek in the Vosges. The first day there was an open sky through which we could see the Alps above the cloud cover. The other days were more foggy and the last day it snowed.