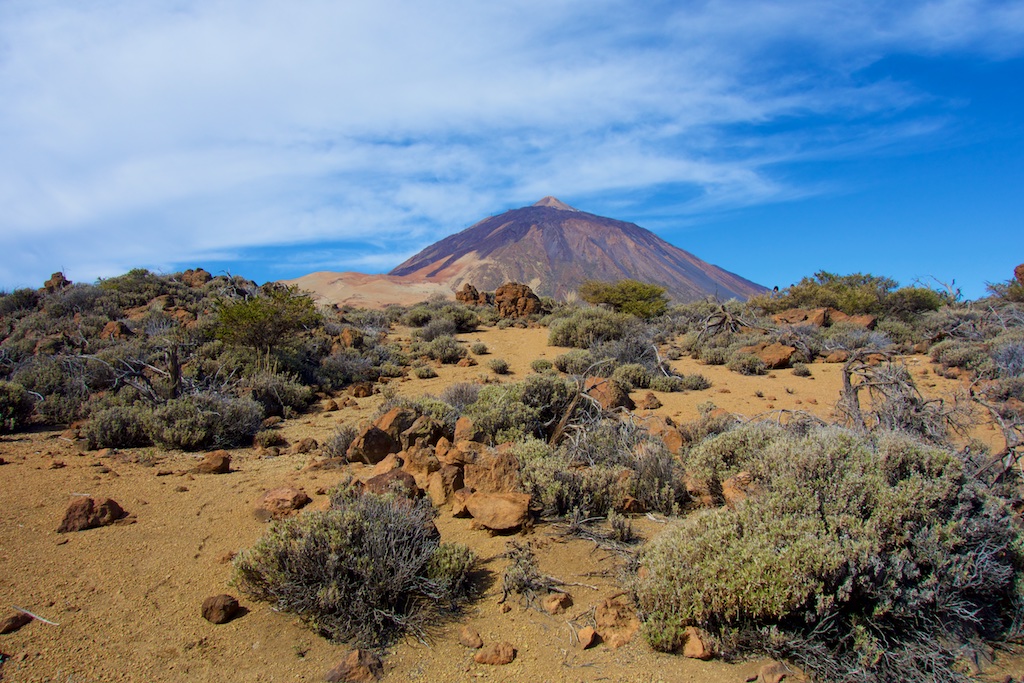 After an adventure in the north of Sweden, my girlfriend wanted a warmer destination to go hiking.

A Google search led to the Canary islands: La Palma, La Gomera and Tenerife were shortlisted, and eventually the Tenerife section of the GR 131 hiking trail was the winner. But unfortunately Hannelore couldn’t make it after all: so I went on a solo hike.

I booked with Brussels Airlines, despite a negative experience on the last trip: one ticket to the Spanish island to walk the ‘Gran Recorrido 131’.

Hiking on the GR 131 in Tenerife

From the airport I took bus 111 to the tourist centre of Los Cristianos. Waiting for the next bus, an old man in a dark suit a few sizes too big pulled up in a pale brown Peugeot 205 and offered me a ride. I agreed a price, and took an illegal taxi ride up the steep roads to the mountain village of Arona. The car creaked alarmingly. Besides Arabic my old African driver spoke only a little Spanish and English, so he communicated mostly by smiling through what remained of his yellow–brown teeth.

At Arona I could finally start my journey on the hiking route. This Spanish trail runs across all the Canary Islands, off the north-west coast of Africa, and is part of the longer European Walking Route E7.

At the Plaza Cristo in Arona my water supply made my backpack a few kilos heavier. I left the sleepy village to its siesta and was immediately impressed by the beauty of my surroundings.

Winding on dusty trails along old agricultural terraces, I could see the dark blue sea glittering far below while colourful paragliders hovered above my head. Before I knew it I’d lost the winding path, but after an hour crossing jagged rocks and falling into a giant cactus I finally came back to the GR 131: a good start! I began a steep climb through a pine forest blackened by a fierce forest fire. After climbing 1400m in a little more than 20km I arrived at the lovely village of Villaflor, where I re-supplied with water and some nuts for the next day, then walked a few extra kilometres firmly uphill and put up my Trailstar tarp next to the stone footpath.

I woke up with ice on my down sleeping bag, and packed up while hopping around to keep myself warm: but soon the heat returned.

The road goes up and winds through beautiful pine forests: then the panorama changes and I found myself suddenly in a lunar landscape of black lava sand.

Nothing grows here, and the route is recognisable only by stones on the sides of the path. After a time the strange landscape turns into a scramble through large, yellow rocks. I was happy to reach the top – the highest point of the GR 131 – where I was rewarded with a nice view.

Then I wandered comfortably downhill, when suddenly the volcano El Teide emerged from the fast-moving clouds. I made some couscous with dried vegetables and ate while enjoying the landscape.

Sleeping in the semi-dessert

After a short but steep descent I had to go for an extra seven kilometres walk to the tourist spot of Parador to fetch water. In this piece, which oddly enough is not very nice, I’m suddenly meet a lot of day trippers. For the rest, I’ve never came across anyone yet.

With my water supply restored I walked on towards El Portillo. A wide path continues sluggishly under the blazing sun. I walked through a stunning volcanic landscape, where higher up mountain goats jumped sharply from rock to rock as the sun began to set behind the tall volcano. I put my tarp up in the soft lava sand.

That night I saw an incredible starry sky, such as I’d only seen in the Atacama Desert in Chile. It was very cold, and my sleeping bag was closer to its limit temperature than its normal temperature. In the morning my water was frozen, and I waited for the sun which was still hiding behind the Montaña de las Arenas Negras.

In El Portillo I resupplied with water and drank a coffee to warm me up. I lost the track for a moment, and so started off downhill, glad to have a GPX track and, after a few kilometres, to be back on the trail. There was a magnificent view the lush green forests and fast moving clouds below me. The route was now primarily downhill through woods, where Canary pine trees thrive on the volcanic soil.

After a while I saw the sparkle of the sea, with colourful houses stabbing against the Atlantic coastline in the distance. The going was up and down until finally I arrived in El Caldera, where I drank a cold beer in a very typical Spanish café. There are no houses or villages for the next 30km, so my backpack was again 5kg heavier. After a few kilometres I came across a signpost with E7 indicated on it, and after a steep climb found a beautiful campsite in the green rainforest.

That night was much warmer than the previous two. When I put my muddled head out of the sleeping bag I saw the rising sun lighting up El Teide between the dripping pine trees. Everything went into my clammy backpack and I started immediately on a long steep climb towards Roque del Topo.

Beyond this the way takes a narrow path above a deep gorge, Barranca del Inferno. The most dangerous sections have wooden fences beside the path.

After a long climb I followed a declining path through moist forests, nearly 15km from one ravine to another, sometimes with the sun shining through the trees but mostly in thick cloud. The transparent grey fog came and went, the veils disappearing within seconds.

Dark green laurel trees took the place of pine trees as I descended further. The last 10 km take a wide dirt road through eucalyptus trees to the village of La Esperanza.

The arrival isn’t spectacular, but I’d reached my destination nevertheless. As always, the path is the goal, not the end. The GR Tenerife is a beautiful trip! On the 95km trail there is tremendous diversity in the landscape. Highly recommended! Afterwards I’d recommend taking a taxi or bus to the coast and staying a few days in the cosy hostel Los Amigos in Los Abrigos.

There are daily planes from Belgium. I flew with Brussels Airlines from Brussels to Queen Sofia airport. Although there is no train or subway, buses and trams are cheap and have an extensive network. The transport company in Tenerife is called TITSA. Buses are green and white and known as Guaguas (pronounced ‘wah-wah’). The friendly drivers and air-conditioned vehicles make bus trips enjoyable. Do not expect the buses to be punctual, but the appointed hour is a good indication.

There are good links between the airport and major cities. The rates are reasonable and discounts or special rates apply when repeatedly using the same routes.

The GR 131 Natural Tenerife, or Camino Anaga-Chasna, is well-marked and usually the path is clear. Nevertheless I managed to lose the trail twice, probably more my fault than that of the markings. A map is basically unnecessary: I didn’t have one, but I loaded the GPX track onto my smartphone, which was sometimes useful.

Do not expect to find water on the go, let alone directly potable water. A water filter thus has little value: you will need to take enough to drink. Restaurants and cafés are rare on the island. In the Villaflor, El Portillo and La Caldera you can do some shopping if needed. El Parador is a possible supply spot, but the round trip does add 7km to the walk.

The weather conditions were good in late March 2017: warm but not too hot. At night, was near Villaflor and at the foot of Mount Teide, it was very cold. My sleeping bag, with a comfort temperature of 0°C, was on the limit. Between El Portillo and La Esperanza it can be very humid: you are literally in the clouds. In the sheltered, damp forests the temperature can also feel lower than the thermometer will suggest.

The sun’s up about 7 in the morning and sets about 8 in the evening, whether it is summer or winter. Do not expect long summer evenings.

I used Paddy Dillon’s Walking on Tenerife, published by Cicerone. It describes the GR 131 and more than 40 other day walks on the island and El Teide. Now there is a guide for the GR 131 on all the Canary Islands.