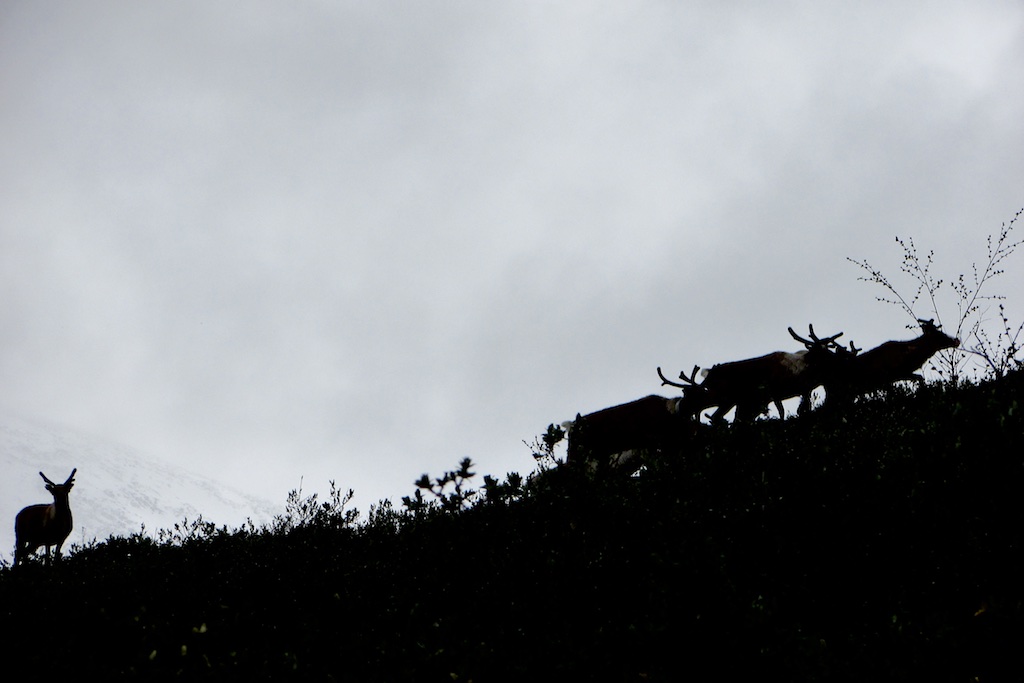 Kungsleden trail – The 17th of june 2016 I left early with my ex-girlfriend to the national airport in Brussel. As soon as we arrived we’ve got the unpleasant news that there was a strike and our luggage was not flying with us to Sweden. With some extra stress and disappointed we arrived in Stockholm later that day. It was a sunny day but  unfortunately we hadn’t enough time to do some sightseeing. After a short bus ride from the airport to the city center we boarded at the ‘Artic circle sleeping train’ for a 19 hour journey to Abisko, 68° latitude, at the start of the Kungsleden or Kingstrail.

Because of the luggage we had to stay for two extra days at the Abisko Tourist Station in the small mountain village. The first day we did a walk near the Torneträsk lake and Abisko river. The day after we walked up the hill to the ‘Abisko sky station’. Most of the tourists took the ski lift while we were sweating en climbing underneath them. True the clouds and over a snow field we arrived at the sky station, one of the best spots in Scandinavia to spot the aurora borealis in the winter season. We drank some warm tea an went down the other way. After a rewarding 16 km walk we where back at our hostel where we had some pasta an went to sleep.

After some emails, telephone calls and a taxi that costed me 240€ we finally had our backpacks. HAPPY, that was the feeling at that moment.We could start the ‘Dag Hammarskjöld trail‘, the most northern part of the Kungsleden or ‘Kings trail’.

Kungsleden (The King’s Trail) is a hiking trail in northern Sweden, approximately 440-kilometre (270 mi) long, between Abisko in the north and Hemavan in the south.It passes through, near the southern end, the Vindelfjällen Nature Reserve, one of the largest protected areas in Europe. In the winter Kungsleden is a ski trail with approximately the same route. We walked the first 105 km till the Sami village Nikkaluokta.

At the shop we got some extra supplies and gas and started the track just 100m from the mountain station, starting near the mighty river in the Abisko National Parc.

The park was proposed and established in 1909, the same year Sweden’s first laws on nature conservation were created, by a group of prominent Swedish scientists. The purpose of the Abisko National Park was to “preserve an area with northern Nordic fell nature in its original condition and as a reminiscence for scientific research”.

It’s rainy and wet and we walk a few hours close to the roaring river over small paths, wooden paths and hanging bridges. We couldn’t see the famous Lapporten due the weather conditions. It’s a huge rock formation, the gate to the world of the Sami people.

After a few hours we came at the  Abiskojaure hut. STF Abiskojaure lies in the Abisko National Park by the clear mountain lake Abiskojaure. The mountain cabin has a beautiful location on two popular long-distance hiking trails: Kungsleden and Nordkalottleden. We don’t stop at the hut and walk

on true the wet landscape. We see our first reindeers and after 30 km we set up the tent on a beautiful spot near a lake. We try to make a dive in the water but after approximately 1.23 second we’re out of the water. It’s melting water from the glaciers and freezing cold. After a warm meal we go to sleep. Around midnight I wake up, the midnight sun is burning on the tent and I get out of my sleeping bag.

We’re awake early, this 24h-sun-thing is a bit messing with my internal timing. I make some coffee and after a granola breakfast and breaking up the tent we’re off again. After 6 km on very wet paths we cross the second hut on the trail,  Alesjaure. STF Alesjaure is positioned on a hill with a mile-wide view along Kungsleden and is STF’s largest mountain cabin. We drink some tea and cross the nearby lake over a long hanging bridge.

After Alesjaure there’s a 13 km long climb true rocky wetlands with waterfalls, mountain rivers and snowed mountain tops. We cross some minor snow fields from time to time or wade true a cold river. On a beautiful spot we make some lunch while a running reindeer is passing us. Powered up we hike further in the direction of the Tjäkta hut.

The mountain cabin lies on a barren slope of the Kungsleden hiking trail that rises to the highest point of the trail, Tjäktja Pass. We can’t enter the small hut because we have no intention to stay there for the night. But we get some warm apple tea and chat a bit with the friendly hut keeper.We walk on along the highest point of this trail when we climb over the Tjäktja-pass and down to the next valley, tjäktjavagge. It’s a demanding and hard crossing. The snow is melting and soft and our progress over the misty pass is slow.

After 4 km snowfields we take a short brake in an emergency cabin on top of the pass. I have to motivate Hannelore a bit but after 10 minutes we’re good to go again. A steep decent brings us in the wide Tjäktjavagge valley. After a few kilometres we stop to pitch te tent. There is a strong wind and it’s very cold. A fast meal and in to our sleeping bags. There’s bad weather at night with rain, wind and a few strong hailstorms.

It’s a demanding and hard crossing. The snow is melting and soft and our progress over the misty pass is slow.

After a cold stormy night we continued our track. The weather is still cold and misty and we both make a nasty fall on the slipery wooden paths. Some scratches, a blue eye and swearing is the result. After two hours walking we pass the Sälka hut where we stop for a coke and a chat with he person in charge. I asked him if he knew the result of the Belgium-Sweden match on the European championship in France last night. He told me that the first thing he did when the soccer madness started was taking of to the mountains 🙂 STF Sälka lies in the intersection between two valleys, Tjäktjavagge and Stuor Räitavagge, in the Kebnekaise massif. There is also a sauna, tempting but we go further on the trail.

True a rocky valley we walk on towards the Singu hut. STF Singi lies in the open and barren landscape where the valleys of Ladtjovagge and Tjäktjavagge meet, in the Kebnekaise mountain range. Hiking trails from here take you in all directions: Kebnekaise to the east, Vakkotavare and Saltoluokta on the Kungsleden trail to the south, Hukejaure to the west, and Abisko to the north. We walk further east and leave the Kungsleden from here. After a steep climb we set up the tent and have a relaxing evening in a beautiful valley with a lake vieuw.

In the morning the clouds are packed in the valley and it’s wet and misty. But when we go further down the valley the sun breaks true. We come a a big green valley full flowers and reindeer. We see more people and trail runners now and after some extra kilometers we arrived at the feet of Kebnekaise and the Kebnekaise Fjällstation. It’s a big mountain station with a restaurant, shops, rooms,… A helicopter is flying on and off to get new supplies to te station.

Kebnekaise itself is the highest mountain in Sweden. The Kebnekaise massif, which is part of the Scandinavian Mountains, has two peaks, of which the southern, glaciated one is highest at 2,097.5 metres (6,882 ft) above sea level as of August 2014. The northern peak is 2,096.8 metres (6,879 ft) and free of ice.

We take some time to rest in the sun, take advantage of the WIFI signal and eat and drink a few not-dried-stuff-things 🙂 For the first time we need our sunscreen.

When we go further we are back under the tree line and there are the midges. We walk further true beautiful landscapes along rivers and lakes. Just before Nikkaluokta we decide to pitch the tent near a mountain river. We make a campfire, take a (short) swim in the cold river, eat and eventually go to sleep after an attack of 2 million midges.

We walk the last 3 km to the sami village Nikkaluokta  where we have some hot drinks and wait for the bus to Kiruna.

Kiruna is the northernmost town in Sweden, situated in the province of Lapland.The city’s vicinity shares a long history with the indigenous Sami people, with evidence of at least 6000 years of settlement. The city of Kiruna was founded in 1900 and quickly became a major centre of iron ore extraction and mining industry. During World War II, large quantities of iron were transported from Kiruna by rail to the east coast, and further down to be sold to Germany. Due to Kiruna’s position north of the Arctic Circle the city experiences both midnight sun and polar night throughout the year as well as a very cold climate by Scandinavian standards.

The re-development of Kiruna is a reconstruction project, as the Kirunavaara mine undermines the current town center. Several buildings are to be moved or demolished. The town center is to be moved 3 kilometers to the east.

It’s midsummer so everything is closed an people go to there relatives to celebrate, for me it seems to be like christmas in the summer with 24h light. So Kiruna was a bit boring, we visited the church enjoyed the luxury of our room  at ‘The Bischops Inn‘ and had some decent food (burgers and fries 😉 ).

We took the train and after 17 hours we arrived in Stockholm. With a few buses, metro, airplane, train and car we arrived back at home.

A great beautiful journey I can recommend to everyone!

We took a Brussels Airlines flight from Brussel to Stockholm (2h15). In the Swedish capital we boarded the Artic Circle train. The sleeping train arrives in Abisko after a 19h ride. Kiruna to Stockholm was 17h. Bookings at  sj.se.

You can also fly between Stockholm and Kiruna which is a little more expensive but faster. From Kiruna you can go to Abisko by train or bus or walk the trail in the other direction off course.

between  Nikkaluokta en Kiruna there is a bus two times a day.

The way is marked very good and it’s difficult to get lost. From Singi there are no more marks but you just have to follow the path. The winter path is marked with red crosses.

In Sweden they know the ‘Allemansrätten’, the Right of Public Access is unique and the most important base for recreation in Sweden, providing the possibility for each and everyone to visit somebody else’s land, to take a bath in and to travel by boat on somebody else’s waters, and to pick the wild flowers, mushrooms, berries.

It is your responsibility to have knowledge about the rules concerning the Right of Public Access!

You have the right to:

You are prohibited to:

Don’t plan your trip during the  Fjallräven Classic when it’s getting crowded on the trail.

Weather on the Kungsleden trail

We enjoyed the Polar sun. The midnight sun is a natural phenomenon that occurs in the summer months in places north of the Arctic Circle or south of the Antarctic Circle, when the sun remains visible at the local midnight. Around the summer solstice (approximately 21 June in the Northern Hemisphere ) the sun is visible for the full 24 hours, given fair weather. The number of days per year with potential midnight sun increases the farther towards either pole one goes.

The weather was wet and sometimes stormy, the last days was beautiful with a lot of sun.

Documentary about the Kungsleden trail